Silicon is the element of controlling almost all alloy aluminum alloys foundry both gravity sand casting and shell (Al Si7Mg0.3 Al Si12, Al Si7Cu3, ...) in die casting pressure (Al Si9Cu3Fe Al Si17Cu3). Silicon is also used in ferrous alloys where it is added in the form of ferrosilicon. There are essentially three qualities of industrial silicon are distinguished by their level of impurity. The metallurgical silicon has a low level of purity while electronic and solar photovoltaic applications require a purity level much higher. Various forms of silicon

Different types of silicon
There are three levels of purity silicon, designated according to use:

Discovery
Silicon was discovered in 1824 by JJ Berzelius in Stockholm, Sweden.

It is, after carbon, the most abundant element in the earth, the distribution is 277,000 ppm. It is usually found in the form of silicate in many rocks, clays and soils. Silicon is obtained by reducing silica (sand, SiO2) with carbon. A subsequent fusion zone gives a purer element for applications requiring high purity silicon (eg semiconductors). Silicon exists in two allotropic forms: brown silicon is a powder, whereas crystalline (metallic) silicon is gray and it is the latter that is most used. Bulk silicon does not react with oxygen, water, acids (except hydrofluoric acid) but is soluble in hot alkalis.

Silicon has many applications in various industries. The ultra-pure silicon is used, for example, in the semiconductor industry due to its semiconducting properties. Silicon is also used as an alloying element in some alloys (ferrosilicon, for example, an alloy of iron and silicon that is used to introduce silicon into the steel and iron). It is also used in the manufacture of glass.

Production of metallurgical silicon
For free silicon (sometimes mistakenly called "silicon metal" to distinguish ferrosilicon), it must be reduced; industrially, this reduction is achieved by électrométallurgie in an electric arc furnace with a power open up to about 30 MW. The overall reaction is a reaction principle carboreduction:

SiO2 + C → Si + CO2
The reality is more complex, with intermediate reactions leading for example to the formation of SiC, SiO (unstable).

In practice, the silicon is introduced in the form of pieces of silica (pebbles or pieces of quartz vein), mixed with reducing agents such as wood, charcoal, coal, petroleum coke. Given the purity requirements of the final application, the silica should be relatively pure (low iron oxide in particular), and carefully chosen gear (washed coal for example).

The mixture is poured into a melting pot of several meters in diameter, where cylindrical carbon electrodes (usually three), which provide electrical power and achieve very high temperatures which sought reactions need plunge (around 3000 ° C in the region of the arc at the tip of the electrodes).

The silicon obtained is collected in "pockets" in the liquid state, through openings in the crucible. It is then refined in the pockets, by injecting air to oxidize the aluminum and calcium.

Then it is separated from the "dairy" (oxides produced during the various stages of the process and trained with the silicon) before being solidified:

Depending on the application, silicon is used in the form of pieces (production of aluminum-silicon alloys), or as a powder obtained by grinding (production of silicones).Four silicon production by carbothermal 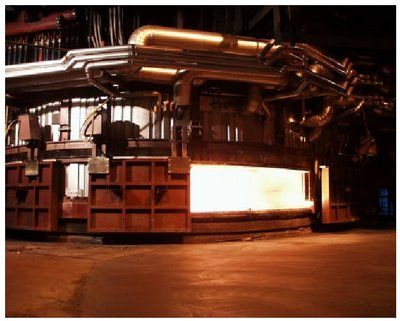 The silicon electronics is obtained from the electro-metallurgical silicon, but requires chemical step (purification performed on silane) and a set of physical purification before the drawing of single crystals. Since 2006, the application of silicon panels PV has exceeded the use in electronic circuit (silicon chip).